The plan currently is to completely research, document, and implement the foundation for a build 530 server. Cosmos utilizes Scapeemulator as the basis for the framework currently, plans to shift that around are in progress after functionality is implemented. The issues section has plenty of planned features and status updates on what has been done.

Good luck with your new project! Hopefully this one may get to the stage of being host able for the community??

haha are you new here?

Lighten up nerd, pretty much everyone on these forums can’t finish a project what makes you think you are unique

Any of these projects still ongoing?

You forgot Hybridscape. We should bring it back from the grave.

Or just help me so that we can have our own server if we wanted. Considering the amount of research I’ve done, most of this is pretty trivial now.

As tempting as that is it always boils down to the same result, Content is work a lot of it the amount of time is not really worth it when you consider that if its anything decent Jagex is gonna come after it. I would much rather see the mitb community do something like thornefall

I don’t think nearly anyone in the community is as educated in the sector of how game engines work as much as Taharok is to get that done in a decent timeframe. Plus that project is still under development as soon as he finishes a subproject I’ll be unblocked. (Similar to: Protobuf).

I don’t see anything wrong with creating a decent server. Given, yes, it could be shut down. But it’s still an interesting investment. And it’s always nice just to say we did it.

But you aren’t even changing anything. It’s the same dreary design that’s been used for the last five years, as if that’s the only possible way to write a server.
Even if my challenge on Moparscape is ‘optimisation’, at least it’d lead to something fresh.

It’s not but it’s the simplest model to just add in to get the other core pieces first. Which no one really understands a lot of internal client mechanics hence why every issue in the repository is pretty much research+implementation. Pretty much it currently stands as a test platform, and most of the commands that I use to do certain functions are actually client sided.

All of this is fairly undocumented. Your server doesn’t mean anything if you don’t know this information to try and emulate things in a manner that’s effective.

That coupled with the fact there aren’t many CS2 (Client Script V2) decompilers which the scripts pretty much define how the game is executed and ran in the first place make it kind of hard to just implement content freely.

So trying to say that you need to come up with a new design doesn’t matter when first you need to try and paint a picture of what you’re dealing with. You can engineer to network pipeline and everything else after the fact, and just use what works for now. It doesn’t have to be perfect. It has to fit your specifications.

Finished identifying all the packets.

I have a lot of my client refactored. Pretty much everything BUT the audio classes. I have no knowledge of how the encoding works. Ill commit that soon. Just chugging along on issues

I found out a lot of interesting animation information

There’s actually flags for if the animation should execute while walking, or halt walking (or paths). Also the ‘traverse path’ update block is quite interesting. I’m working on a script decompiler so it’s kinda blocking my other stuff. 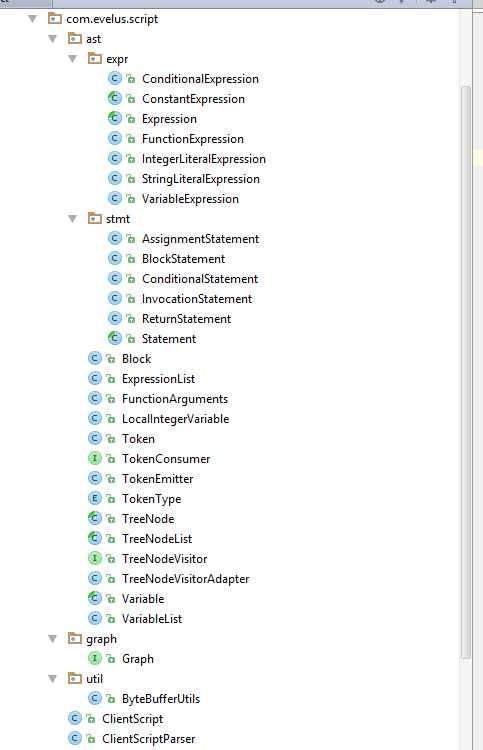 I don’t have it up yet because its a WIP. You can print out a stream of tokens from an AST though which is cool.

I’ve done some research on interfaces in Runescape. Might be of interest to some people. I omitted some fields for now, but the jist of everything is here (the modern format at least).

Also in the most recent commit I changed a lot of message encoders/message names to reflect my naming scheme in the wiki. Also started normalizing packet streams.