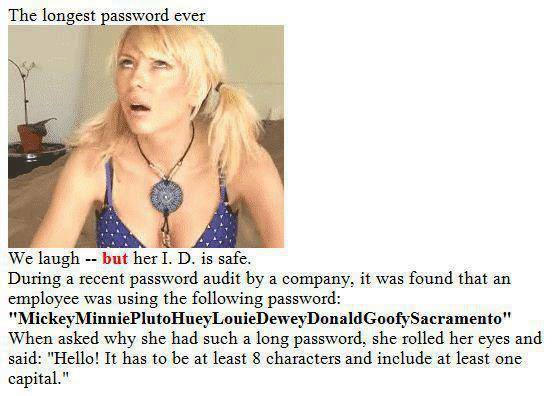 This week on Pedant blog, we take a look at this awful clickbait-esqe image I found on Facebook.

In this most likely made up story, the “dumb blonde” rhetoric is used for comedic effect; her alternative “simple” interpretation of the password restriction results in the creation of a strong password, in a ironic fashion. But, what if, she understood these restrictions when she read them and coincidentally chose the mentioned password. The password contains more than 8 characters and several capital letters - her statement is logically correct both when referring to glyphs and Disney characters/US state capitals.

Maybe this employee was well aware of the restrictions, recognised the “joke” in the password restriction and formed this satirical password for her own personal amusement, not expecting anyone to question her decision.

After pondering away at these possibilities, the real joke emerges - this employee just took part in a “Password Audit”. The fact that her own company knows her password undermines the whole idea of a “Password Audit” - her I.D. is clearly not safe if her employer can see it in plaintext.

The creator of this image is either incredibly stupid, or an absolute genius - 10/10.

Your senses of humor are dulled Lothy by the excess of women and liquor in your life.